Me reading my book, "What Elephant?"

To read about why you shouldn't buy this book right now (unless you buy it from me) go here.
Posted by Redheaded Writing Hood at 2:52 PM No comments: Links to this post

Posted by Redheaded Writing Hood at 1:43 PM No comments: Links to this post

The Apple Does Not Fall Far From the Tree! Another Frienemy 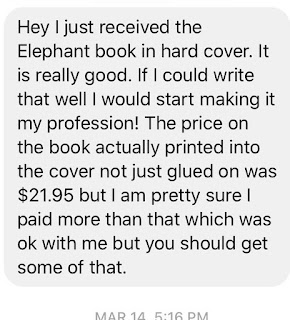 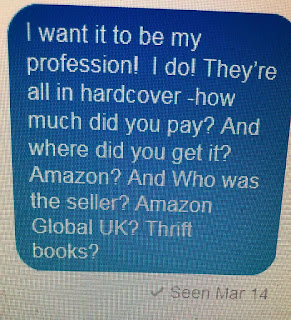 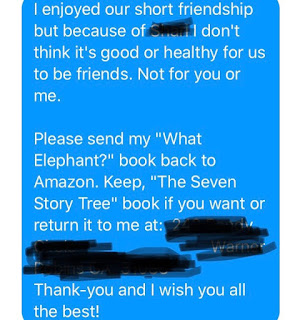 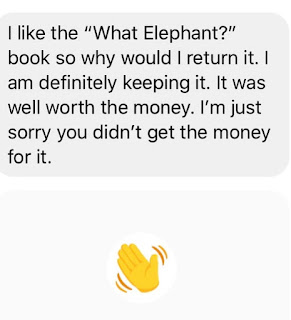 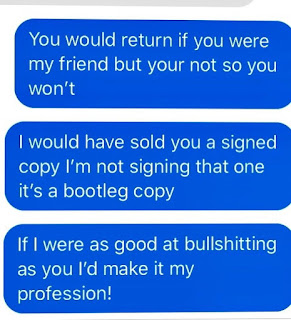 She ignored my questions about where? From who? and how much did she pay? Those were from March 14th. Then on the 27th of March I sent the message about, "We shouldn't be friends...." The other messages are from March 28th and after I sent her the last one, I blocked her. Her and her daughter are very very SAD and PATHETIC.


Here's more to my previous post
So the lady I made friends with because she bought an item from me on facebook ended being the mom of an enemy from the church I was at 18 years ago, her daughter was one of the women that made sure to get three deacons to come escort me and my one year old baby out of church! So I THOUGHT it was all a coincidence but now I believe it was all planned! Another thing I recently discovered is her daughter who has a different last name now has me blocked on facebook, but why? I'm not looking her up, harassing her or want to "friend" her after 18 years? There was NO facebook then! I was not even thinking about her, seeing her or anything! So why block me now? So her mom can buy something from me on facebook, befriend me and bullshit and harass me, I guess? And she had me going! I really thought she was doing these things by accident! But then she said I should change my book! Then I finally realized. I've said this poem that I've memorized all over, in Mexico, the Bahamas, all over the US, it makes women cry and people paid me 20 bucks for "The Seven Story Tree" which that poem is in, when it was only $7.00 on Amazon back then! I have learned an important lesson though; I'm NOT going to sell myself short anymore! I'm worth being treated right! I should have people pay me for my books. I gave away way too many! I am worth having my friends and family respect me! If they don't then I'll let them go.

Read here about why my REAL FRIENDS know not to get my, "What Elephant?" book on Amazon.

My review of "What Elephant?" on Amazon: 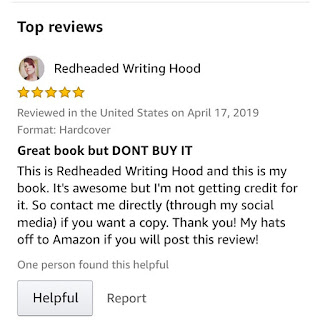 Posted by Redheaded Writing Hood at 2:35 AM No comments: Links to this post

The Church Reunion, Being Brave and Staying Safe 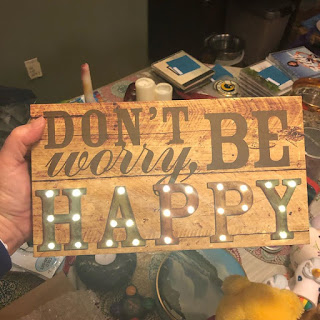 So practice and observe everything they tell you, but do not do as they do; for they preach, but do not practice them. Matthew 23:3

I made a few friends through selling stuff on facebook. Then I found out one of them was related to a person from my past:

Recent texts with a friend:

Me: I went square dancing with my new friend and found out her daughter is this woman I knew from church years ago and all these ppl from back then were at square dancing. It's a long crazy story.....

It's kinda like a weird dream- ever have one of those? Lol

Did I ever tell you I was kicked out of three churches in the area? (This is kinda an exaggeration because it was ONE church in 2002 and TWO Celebrate Recovery's: Shady Grove and Southside Baptist Church in 2014 and those last two were because of Charlie B. and Sandy H.) I'm that crazy lol not really- they are that bad well it's a long story and this person I saw tonight had a part in the first one.

Me: It was......I was telling my friend the story on the way home


I was wondering HOW THE HECK to make this LONG STORY SHORTER AND I CAME UP WITH:

Me: And it's just so hilarious this will sound made up but listen! I was escorted out of church by three deacons for gossiping about the pastor then after we left my oldest  is watching Dr Phil one day and says "Mom come here!" And guess who is on there? The church (same church I was kicked out of) secretary and her husband and she's fell in love with a woman and left him! Well, they got back together and he taught me how to square dance tonight!  True story- yee haw!

Note: It is not my intention to bad mouth these people who went on Dr Phil but just to show the hypocrisy of the leadership for having me escorted out of church. (Trust me we were NOT going to continue going there) It is interesting to note, however, that there were four of us ladies (about my age and abit older) from this old church who were married at that time and of the four of us (me included) ONLY the one who was on Dr Phil is still married to the same man. JS (What church does Dr Phil go to? lol)


BTW: I didn't continue at square dancing (I only wanted to try it out anyway) and of course now it's been canceled like everything else. It was honestly triggering to see all these people again and I knew (beyond the shadow of a doubt) 18 years ago that I no longer wanted to see these people every week! 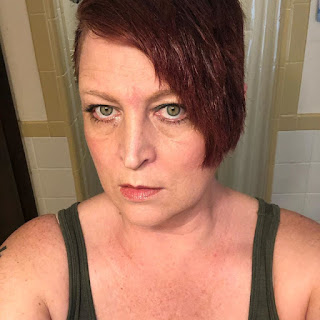 Ya all I’m tenacious, long suffering and (too) forgiving! I’ve been through the ringer! When I think of what went down in the Church I was at 20 years ago- that we went on to another Church to more dysfunctional crap.....but it was just what was familiar to me! I’m looking forward to moving on, eventually getting out of this town and down the line learning to have healthy relationships with my friends (now) AND my children (I guess later) but we all need to forgive one another- I’m not saying I was perfect -far from it - but I’m no longer taking all the blame and being the scapegoat either! It’s a long, complicated story and I didn’t really want to relive it but things kept happening to remind me as if Someone was saying, “Susan you need to write this” Like someone running for city council (Charlie B.)......then square dancing?! of all things! Just continuing to run into people but -wait -why is this weird? Cause I’ve been in this area for 30 years and these people -some of whom I haven’t seen in 18 years! (It was 2002 actually when we left that church) And I was reminded again today when a Sara Bareilles song came on the radio:! She sang, “Say what you wanna say, let the words come out -honestly - I wanna see you be brave!” And with my divorce it was similar, I know some will disagree but I HAD to get ANGRY in order to get away from the abuse and it honestly always aids me in my writing process!

So as if I even needed another sign. (I definitely DIDN'T but thanks) Today I awoke to a comment from my fellow gossiper from 18 years ago! (To the post ABOVE: March 17th) I should "give it to God. Just be me and live my best life." (Thank -you- I am! I also "gave it to God" probably a million times! Why don't He keep it!?) Is she having an "attack of conscience" after 18 years? YOU SHOULD HAVE BEEN ESCORTED OUT OF CHURCH WITH ME, GIRL! (She's the one that asked me, "What's going on?" and you know why? Because of the Pastor's comments in his sermon!) That was the church we left in 2002 and I questioned whether to even include it in my recent Spiritual abuse story from 2012 and 2014 which mainly has to do with people (namely Charlie B. and his sidekick Sandy H.) from "Celebrate Recovery" at Southside Baptist Church here in Warner Robins and Shady Grove in Byron. I'm not naming the church even from 18 years ago because it's a very different church now, with totally different leadership. BUT the stories are very much connected to each other and you will understand that as I reveal the story to you. I had blogged some about both incidents already but I took those posts down recently, I now will decide if I want to put them back up or put excerpts in my new blog post(s).


BTW- I responded by saying that she should have gave it to God instead of responding here, that she didn't have a clue and said "I am being me and living my best life. Are you?" and then I unfriended her. I was on facebook when she read that cause she liked my response but then deleted her comment. lol


So with my extra time at home I'm going to be writing! Yay! I was born for this, baby! And it's TRUE STORIES because I couldn't have made this shit up! TRUTH IS stranger than fiction! Blog posts yes, also videos here and on Youtube and ig but it will all end up in my poems and songs and eventually be another book! RED (My THIRD book- 2nd book of poetry) is close (so close) to being complete (PERFECT TIME TO FINISH IT UP) I was going to publish that (In 2018) with Amazon like I did "The Seven Story Tree" which btw I have ordered copies and will be selling them (signed by the author: ME) on facebook marketplace very soon!

I shared this comment on March 18, 2020 with a picture with a button that said, "Be safe. I need you here with me": I tried so hard to stop being the annoying mom- To figure out what I was doing wrong- If I were talking to my kids or they were talking to me they'd know what I'd say.....But I guess we found out we don't "need" each other anymore BUT I want all five of you to BE SAFE, STAY ALIVE and BE HAPPY I LOVE YOU

To read more about this Church reunion, that I now think WAS planned, go here


Posted by Susan Hewitt Story at 4:17 PM No comments: Links to this post